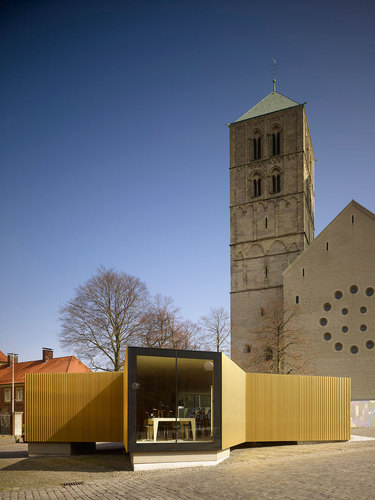 Temporary Pavilion for the exhibition

“Golden Glory”  and a Golden Workshop
On display in Münster from February 26 to May 28, 2012 is the exhibition “Golden Glory. Medieval Treasury Art in Westphalia”, developed by the Westfalen-Lippe Regional Council, the diocese Münster and the excellence cluster “Religion and Politics” at the University of Münster. The exhibition presents some of the finest goldsmith’s work from the late medieval period in Westphalia. Some 300 secular and sacral pieces may be seen across 1500 square meters: symbols for the infinite, the magical and the divine, expression of and testament to the power and wealth of their owners. The exhibition will be shown in Münster at two places simultaneously: at LWL State Museum for Art and Cultural History and at the Domkammer [St. Paul’s Cathedral Treasury]. Both exhibition sites border the Münster Domplatz [cathedral square]. However, the LWLMuseum is currently undergoing renovation and the Domkammer entrance has always been hard to find. The large exhibition suffers from lack of space, as well as an appropriate, more easily accessible entrance. In addition was the curatorial wish to present not only the historical objects, but also the artisanal process showing how they were actually created. Thus arose the idea to erect a small, attractive pavilion containing a gold workshop as well as an information point: a temporary construction for the duration of the exhibition that should reflect the exhibition theme and draw notice to the Domplatz.

Münster’s Glittering Gold Pavilions,  2007 and 2012
The Münster-based architectural group “modulorbeat”, consisting of Marc Günnewig and Jan Kampshoff, was commissioned to design the pavilion. They had already created a portable, temporary pavilion in 2007 for “skulptur projekte münster”, which garnered much attention, not only due to its gold-coloured façade. modulorbeat developed their new creation for “Golden Glory” together with students from the Münster School of Architecture (msa). At the time of their commission, Günnewig and Kampshoff were searching for a seminar theme to teach at the school. In varying groups throughout the semester, several designs were developed, linked, revised, discarded and then revised anew, once the construction’s precise location on Domplatz had been determined. With a second group of students, they commenced planning and the realization of the 95 sq. metre pavilion, which was completed in six weeks’ time.